Pectus or chest wall deformity refers to a relatively common condition where the chest appears irregularly shaped. It typically appears in childhood or early adolescence often around puberty, getting worse doing the growth spurt, at the time of rapid bone and cartilage growth. It becomes 'stable' and essentially unchanged once adulthood is reached.

There are two main types of deformity: Pectus Excavatum (Sunken chest) and Pectus Carinatum (Pigeon chest) but there are many more complex types or 'mixed' pectus deformities as well as other chest wall problems both congenital (born with) and acquired (caused by for example trauma or previous chest surgery).

Pectus deformities are common with pectus excavatum affecting roughly 1 out of 400 children and pectus carinatum occurring in approximately 1 out of 1500 children. In both types, boys are affected more commonly than girls. 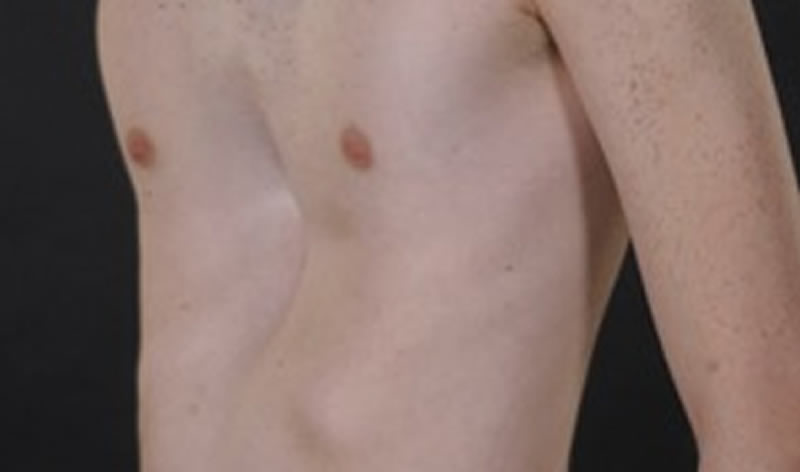 A boy with a severe asymmetrical pectus excavatum

The cause of pectus deformities is unknown but both pectus excavatum and pectus carinatum run in families with up to 1 in 4 affected individuals reporting chest wall deformities in other family members. Though no specific genetic marker has been identified, pectus deformities probably have a genetic cause. In both types the deformity of the chest probably comes from abnormal musculoskeletal growth with the cartilaginous portion of the rib (costal cartilage) the main source of the abnormal growth pattern.

Pectus deformities are usually found in isolation but both types can be associated with other musculoskeletal problems such as scoliosis (sideways curvature of the spine) and kyphosis (excessive curvature of the spine causing the top of the back to appear more rounded) as well as certain specific syndromes for example Poland syndrome (a rare genetic disorder characterized missing or poorly developed muscles on one side of the body leading to abnormalities of the chest, shoulder, arm and hand) or Marfan's syndrome (a genetic disorder affecting the body's connective tissue). 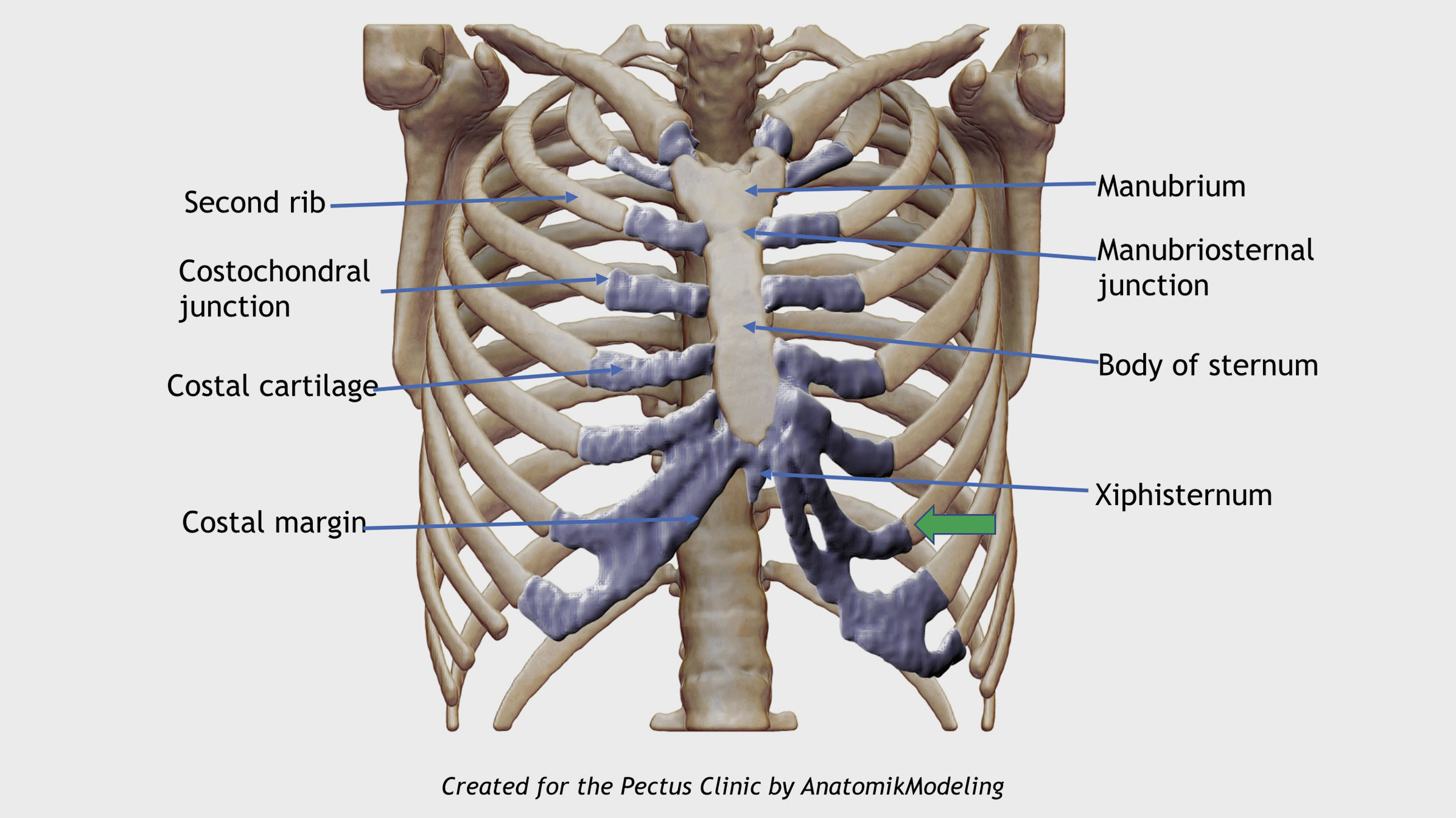 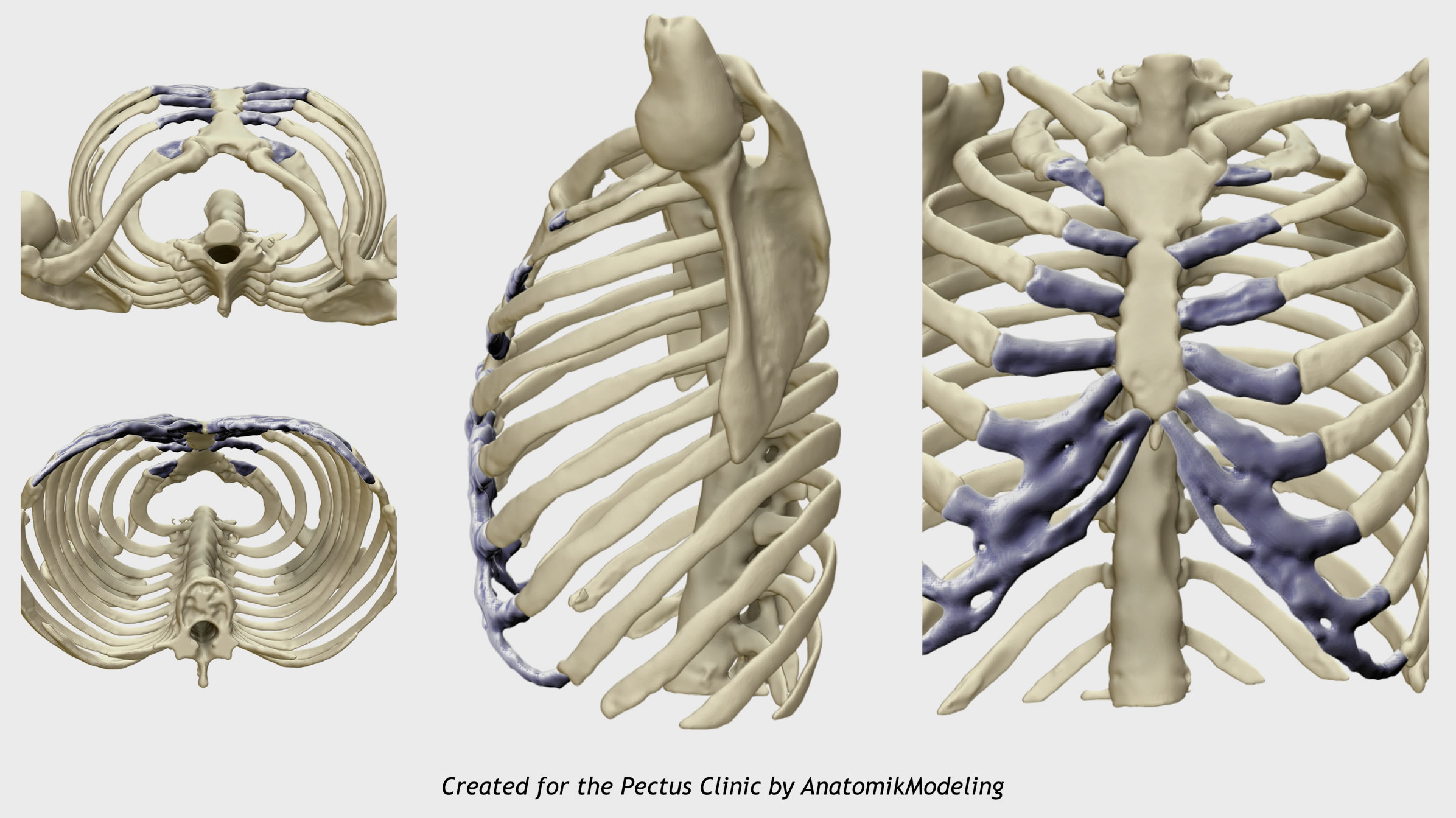 The most common chest wall deformity, pectus excavatum or sunken chest is most likely caused by abnormal inward growth of the costal cartilages between the ribs and sternum.

The most second common chest wall deformity, pectus carinatum or pigeon chest is most likely caused by abnormal outward growth of the costal cartilage between the ribs and sternum.

Though less common than 'isolated' pectus deformity, mixed types are the most challenging form both in terms of diagnosis, including associated issues and treatment.

One of the most common aspects of pectus deformities is an abnormality of the associated ribcage. This typically affects the lower ribs and the lower edge of the ribcage (the costal margin).

Both pectus excavatum and carinatum are associated with other musculoskeletal problems and lead to 'poor posture'. It is important that these are also addressed if the best outcome is to be achieved.

Certain Syndromes and other rarer conditions can cause or be associated with pectus or pectus-like chest wall deformities and may need to be identified.