The pectus clinic is actively involved in academic research and collects data around the measurements we take, and results achieved. We would like to share some of the data we collected, and the presentations and papers published.

External compressive bracing is a well-established treatment for pectus carinatum or pigeon chest with many papers published in the literature from around the world.

A selection of our recent presentations and publications on topics related to pectus carinatum and bracing.

This study aimed to characterise the epidemiology of this condition through the examination of a large cohort of patients from a single centre. Based on the physical characteristics Pectus Carinatum is better described as a developmental chest wall disorder which can associate with functional deficit as opposed to a congenital cosmetic disorder. From our series, the results corroborate this; the typical age of presentation is 11 years old with a family history in 26.4% of patients, with 32.6% of patients being symptomatic. 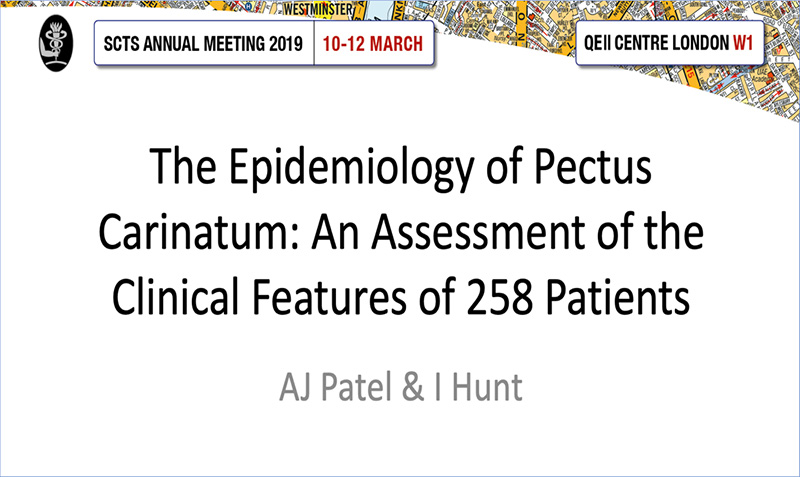 The study examined the association and significance of musculoskeletal deformity and potential long-term sequelae in Pectus Carinatum. 51.6% were noted to have one or more musculoskeletal abnormalities. The most common associated posture issue was rounded or anterior projected shoulders, followed by forward head movement. The common cluster of posture-related problems was anterior rounded shoulders and thoracic kyphosis seen in around 21%. 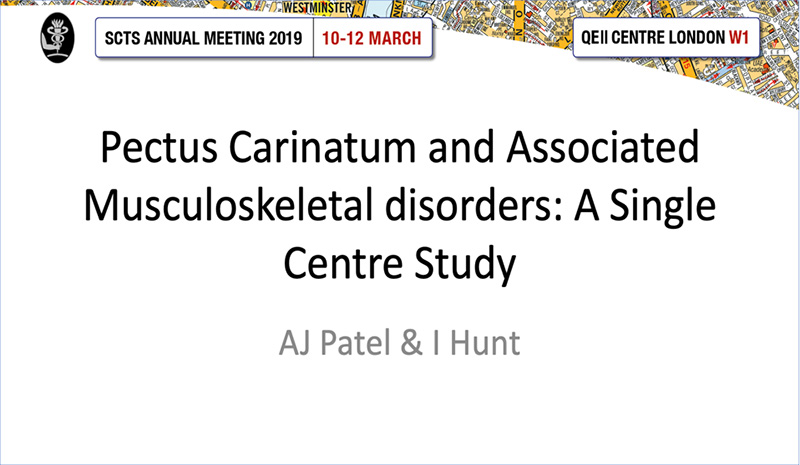 The study examined the association and significance of rib abnormalities together with potential long-term sequelae in Pectus Carinatum. Nearly half of patients were noted to have one or more rib abnormalities. The most common associated abnormality was left directed costal flaring (88%), followed by right directed flaring (78%). Bi-directional flaring was present 77%. The majority of these defects were classified as mild (66%). 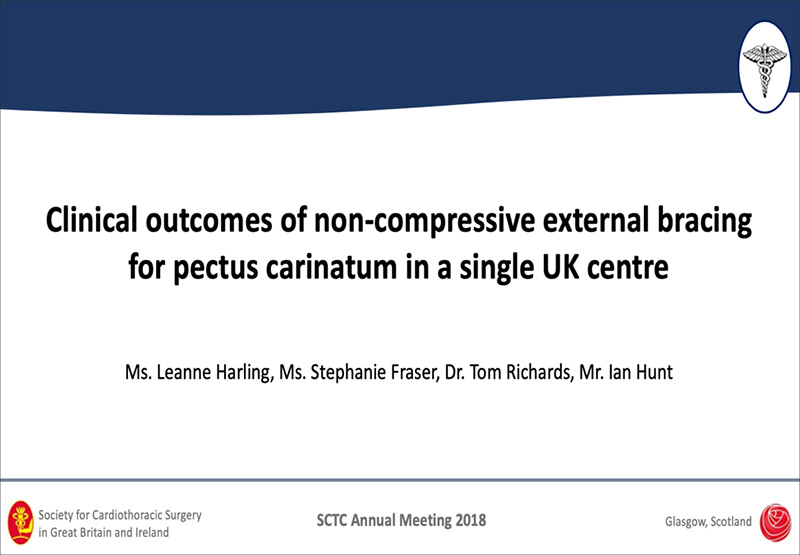 The study aimed to ascertain whether a clinical model of the Haller index could be utilised to assess the severity of pectus carinatum deformities in an out-patient setting without the need for radiological investigations. A low Pectus Index correlated with increasing severity of the deformity. Patients with a PI of >1.29 were associated with mild deformities, 1.28-1.18 had moderate deformities, 1.17-1.07 had severe deformities and a PI of <1.02 was associated with extreme forms of pectus carinatum deformity. 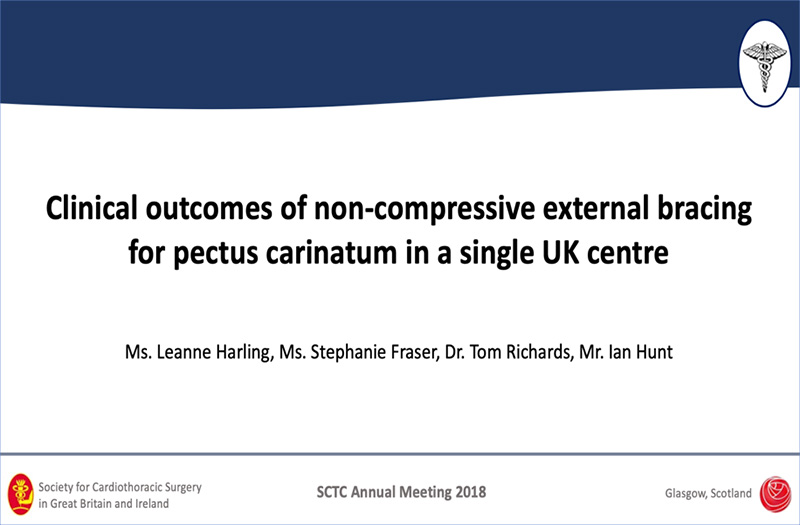 The article reviewed the current evidence around the role of compressive external bracing in treating patients with flexible Pectus Carinatum. Sixteen articles were integrated after literature review; all articles were compared on the factors including age and sex of treatment cohorts, method of assessing PC (degree of severity as well as type), patient selection protocol (i.e., suitability for external compressive bracing), the bracing protocol itself, duration of treatment, metrics used to assess outcome and success, compliance and dropout rate, and length of long-term follow-up. All the papers reviewed were descriptive case series over a median period of 4 to 24months with two papers not stating the study period. Ten of the papers included 100 or less patients within their study, with only two papers including a significant number of patients (> 250). We concluded that This treatment modality has been demonstrated to be effective, safe, and reasonably well tolerated but the crucial point to convey here is the high degree of variability in the studies reporting on this technique; not only in the technique protocol itself but factors, such as age of patients recruited, length of treatment, outcome measures, and even making some form of appropriate assessment of type, and severity of the PC and using that to inform patient selection. 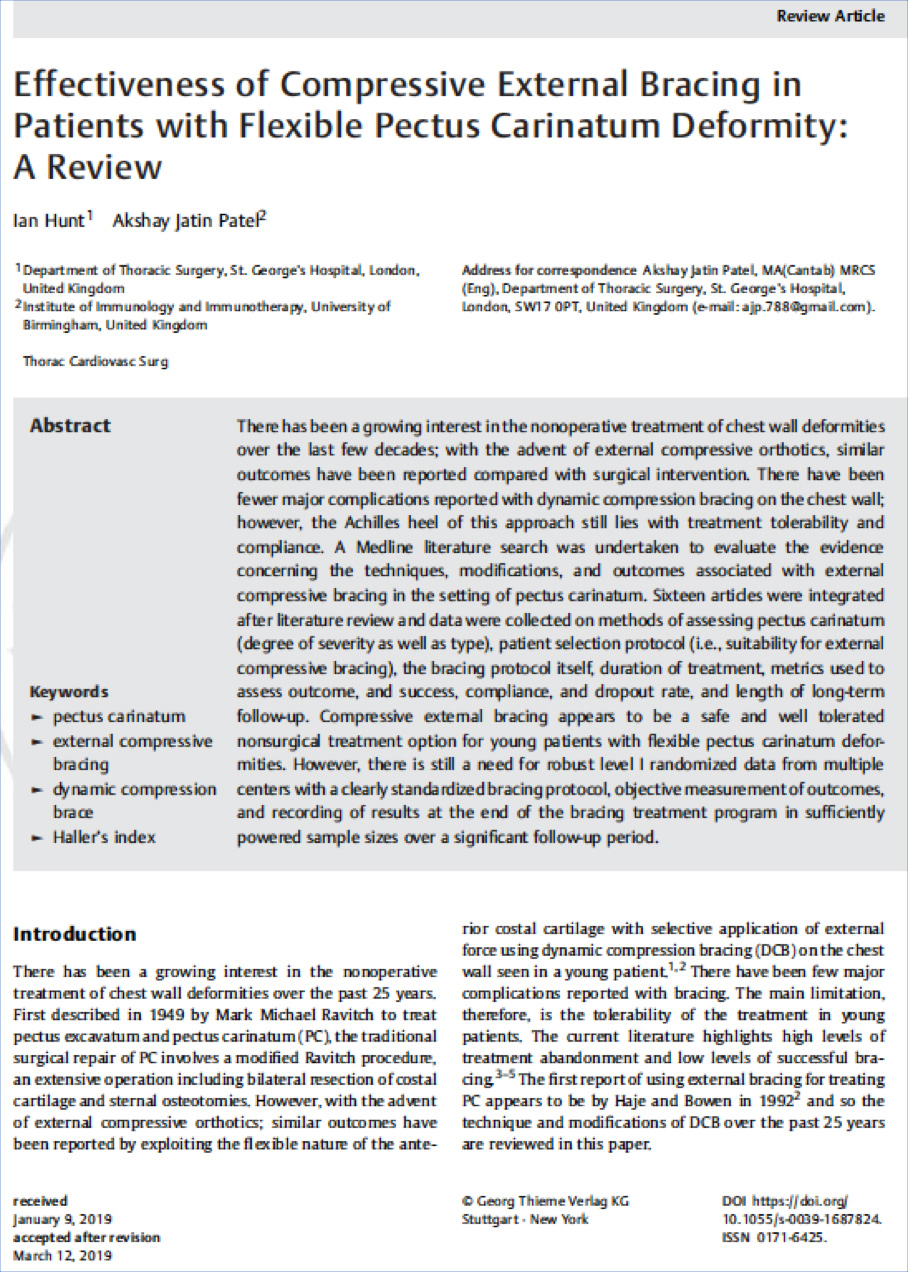 Published in the Annals of Thoracic Surgery the study investigated the clinical outcomes achieved using initial reduction of the pectus carinatum and a tailored schedule. The reduction is an outpatient physical therapy technique that allows for an immediate correction or near correction of the pectus carinatum prior to fitting of the brace. It is unique to the Pectus Clinic. The brace is then worn continuously for a period of time without the need to constantly tighten the brace over time. A prescriptive schedule of brace wearing has been developed. The schedule is divided into an intensive wearing schedule in the first 8-12 weeks followed by a wearing schedule of slow and careful reduction in brace wear lasting typically a further three to five months. The final stage or maintenance period wear the brace is worn occasionally lasts variably for one to three months prior to the end of the brace program. Based on data collected from the Pectus Clinic just under 250 patients were studied, the breakdown of age, gender and other patient demographics including pectus carinatum severity are shown in Table 1.

At the time of study 159 patients had completed the bracing protocol, and 85 patients continued in the weaning phase of bracing. Of the 159 patients who completed bracing, the median duration of wear was 32 weeks for active bracing and 40 weeks until the end of the maintenance phase. There was an immediate and statistically significant reduction in the peak of the deformity of around 3.5 cm (P < .001) that was maintained throughout the study period. Patients described an immediate improvement in the subjective assessment of the appearance of their chest wall (Figure 5). A summary of the quantitative self- reported satisfaction scores is shown in Table 3. When asked to rate the appearance of their chest before treatment, the median self-reported score was 3 out of 10 (range, 1-8). At their first follow-up appointment this increased to 8 out of 10 (range, 2-10), which was consistent throughout their follow up (second follow-up: median, 9 [range, 4-10]; third follow up: median, 9 [range 6-10]). This improvement was statistically significant (P < .001) at each follow-up when compared with baseline. Patients also reported high levels of satisfaction with treatment. When asked at their first follow-up whether the treatment was as good as they had hoped, 94% of respondents (204/217) scored 5 or more out of 10 with a median score of 8.

Patients experienced a statistically significant reduction in symptoms of anxiety and depression) and improved body satisfaction. Mild skin irritation occurred in 18% of patients (n=44) and there were two severe cases of skin irritation, one of which resulted in abandonment of bracing. The overall the study showed the technique and prescriptive brace scheduling to treat pectus carinatum produced excellent outcomes compared to other bracing programs.

Overall the study demonstrated there was successful sustained reduction of the deformity with high reported rates of successful outcomes (98%) and satisfaction with the result achieved (94%). 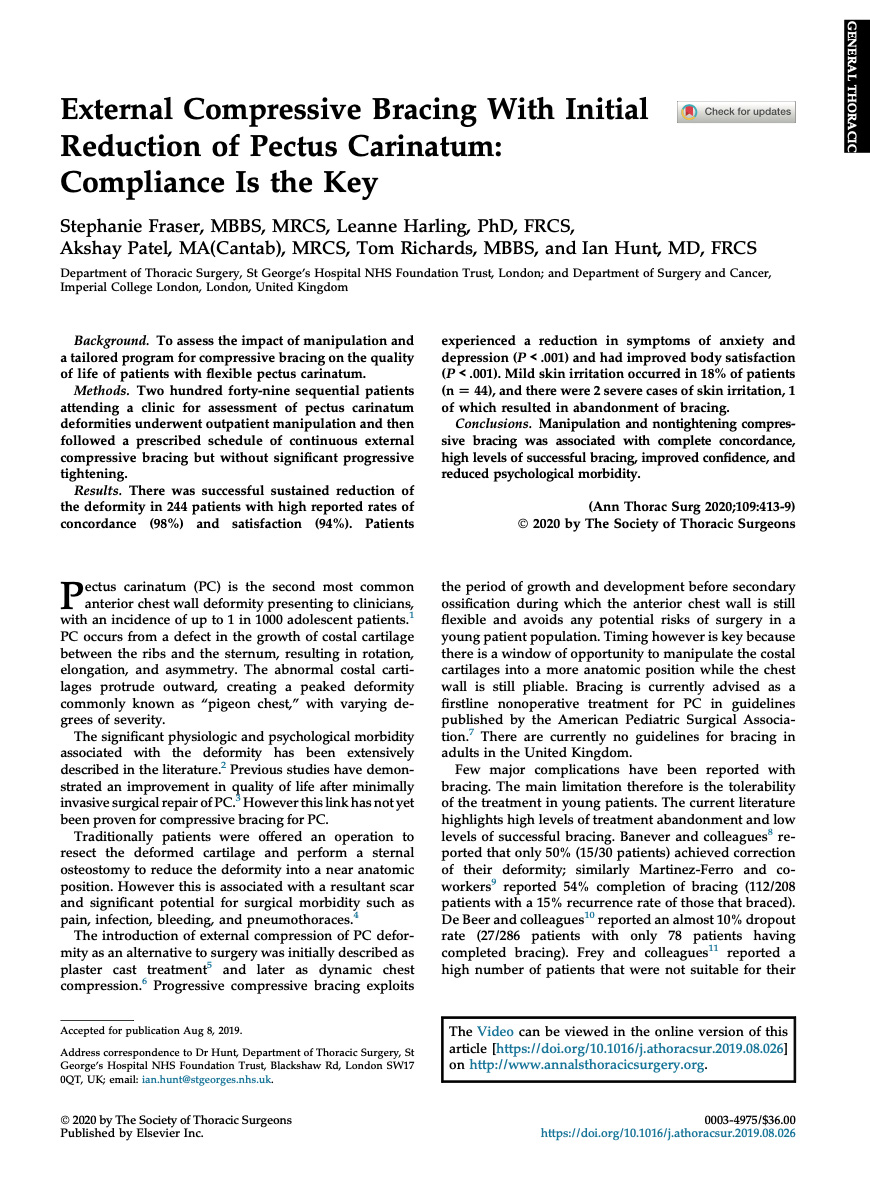 The study published in the Journal of Pediatric Surgery investigated the technique of outpatient manipulation, its safety, associated complications and early results. Manipulation refers to a physical therapy technique involving a careful and controlled deep soft tissue massage to the cartilage element of the anterior chest wall on either side of the sternum. There are several elements to the technique but maintaining the reduction of the pectus deformity prior to using the brace to then hold the chest in place. We looked at 230 patients with pectus carinatum and of those just under 180 patients were felt to candidates for outpatient soft tissue manipulation prior to immediate custom fitting of an external compressive brace. These patients then followed a prescriptive schedule of 12 weeks of continuous external bracing with subsequent follow-up in clinic.

All 177 patients included in this analysis underwent successful reduction of their deformity at the initial consultation without immediate complication. 173 patients had attended 12 weeks of follow-up (mean 11.5 weeks; range 5–40 weeks). The remaining four patients are included in the results below under ‘failed bracing’ (2.2%; n = 177).

The measurements performed at the initial consultation enabled comparison of the morphology of the deformity throughout the period of bracing. The apex of the pectus deformity was measured with calipers and the average height from the patient's back to the highest point of the deformity was 21.6 cm (range 15.5–33.0 cm) prior to manipulation and external bracing. At 12 weeks, the apex of the deformity was on av- erage 18.1 cm (range 14.0–28.0). The average reduction in the apex was 3.5 cm (range 0.0–12.0 cm) following initial reduction and manipula- tion and 12 weeks of bracing which was statistically significant (p b 0.0001). Patients self-reported feeling that the results were as good as they hoped for with an average score of 8 out of 10 (median 9; range 1–10). 88% of patients stated that they would strongly recommend this tech- nique (n = 152) while only 2% (n = 3) said that they would not recom- mend the procedure in the future with 10% undecided (n = 18).

Skin complications were encountered in 39 patients. The majority of these (n = 38) were mild to moderate skin reactions which required ap- plication of either a simple water-based emollient or a zinc-oxide based barrier cream. This was applied in the first 12 weeks and all cases had re- solved by 24 weeks. Only one severe case of skin irritation was noted, which was subsequently confirmed as ring worm following dermatology review. 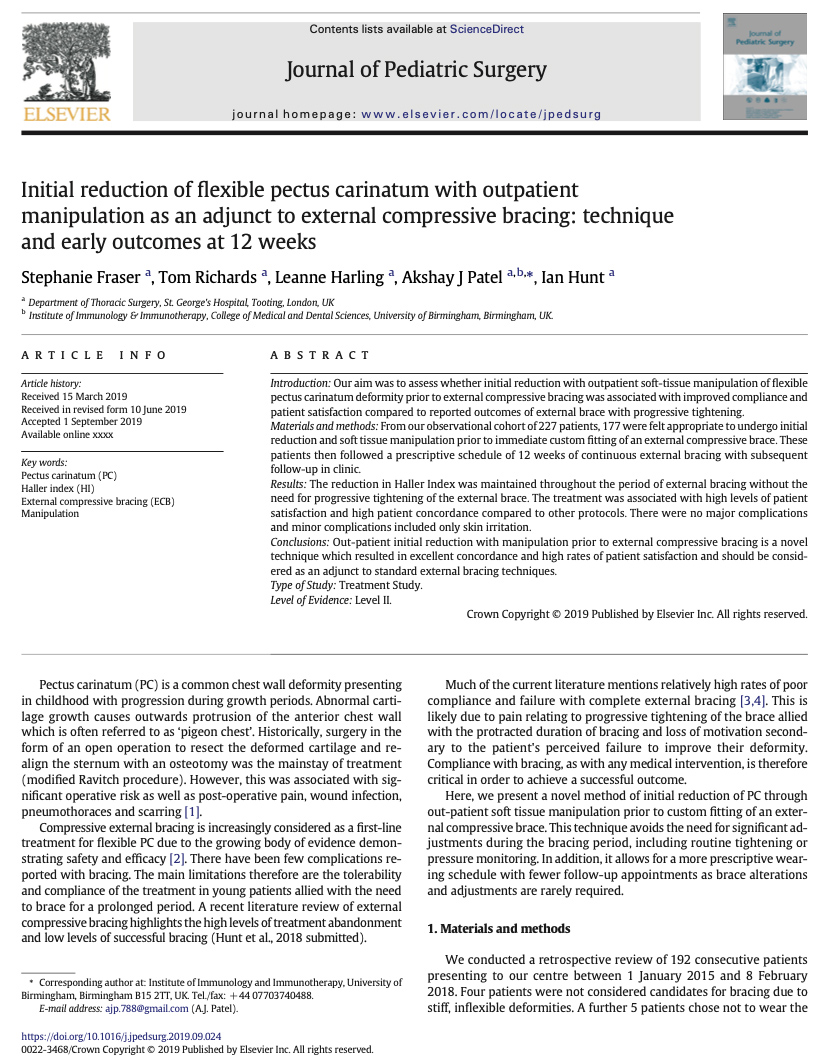 Vacuum Bell Therapy (VBT) is a technique where by suction is applied to the Pectus Excavatum chest to gradually correct the deformity. Though less well established than external bracing for pectus carinatum with careful selection and commitment there is evidence of correction of pectus excavatum.

Is vacuum bell therapy effective in the correction of pectus excavatum?

A structured review of the current evidence in the medical literature was carried out. We found 19 papers and following careful selection using a set criterion identified 7 papers for further review. Many surgical teams have demonstrated the role of VBT in pectus excavatum; the largest series has followed up patients over 13 years with sternal elevation of >1 cm being demonstrated in 105 patients. The best results were found in patients who were Initially: age <11 years of age, chest wall depth <1.5 cm and with evidence of chest wall flexibility. The effects of VBT have been confirmed on computed tomography scanning and intraoperatively to lift the sternum to facilitate retrosternal soft tissue dissection during the Nuss procedure. There was significant variation in the studies reviewed, in terms of patient age, selection criteria, the VBT protocol, length of follow-up time following completion of VBT and the metrics used to assess success of therapy. VBT is a safe therapy for treating pectus excavatum in a non-surgical conservative manner with few complications reported. However, the success of VBT is largely dependent on patient compliance and motivation. Permanence of correction after completion of VBT needs to be properly assessed through rigorous follow-up, and currently the success of correction, i.e. permanence, remains in the hands of the patient. 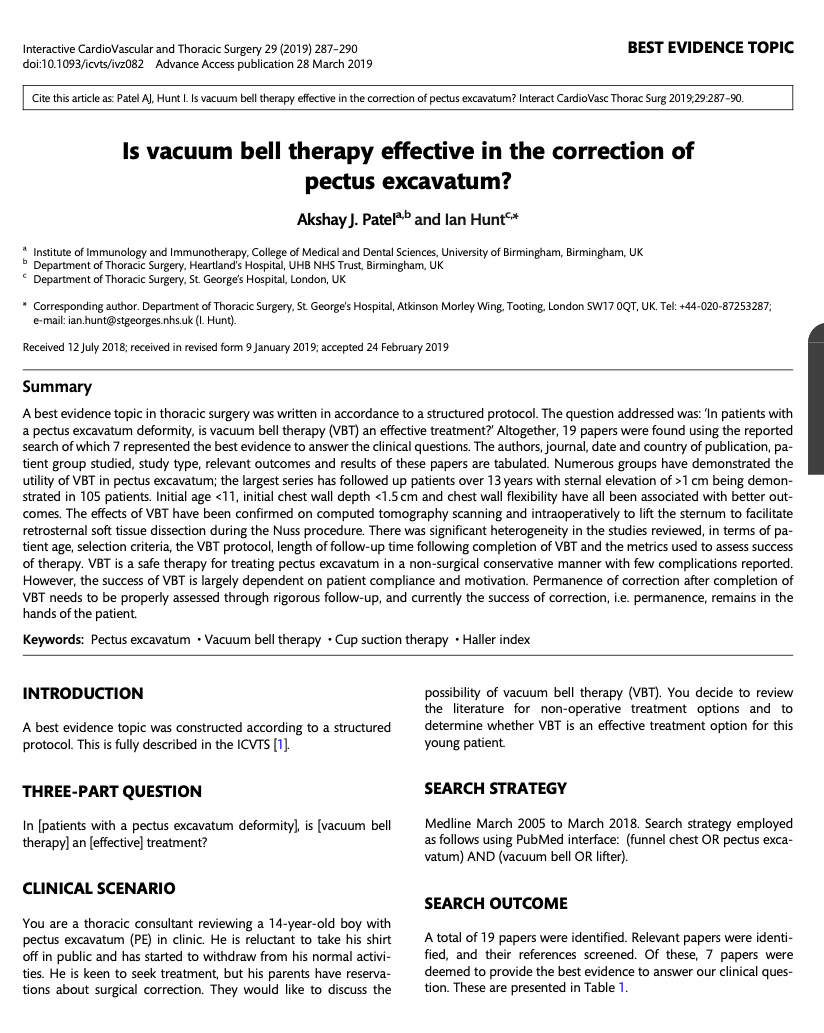